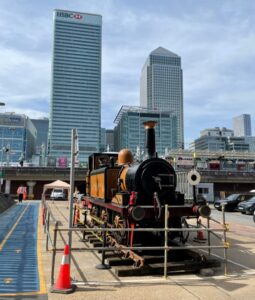 Over six days in June, alongside schools from Tower Hamlets, we welcomed a steam locomotive called ‘Poplar’ back to the area from where it took its name. London Brighton & South Coast Railway Terrier No 70 ‘Poplar’ has recently been restored to the full glory of her heyday, including reviving the original ornate livery that she carried when first built in 1872. The restoration project was undertaken jointly by The Kent & East Sussex Railway (K&ESR) and The Terrier Trust.

As part of the 150th anniversary celebrations, Poplar was brought back to Tower Hamlets where Global Learning London has been working with local schools to learn more about the history and heritage . Such as how railways transformed the way people live, science – including sources of energy and changing environmental considerations, English- with railway-themed stories, poems, music and art skills. 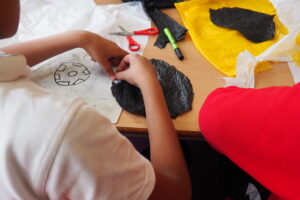 We’ve been creating flags with young people to share all about themselves – what they like and dislike, things they are interested in, their local area and what they’d like the world to know about them. We explored ideas around symbols and what they can represent and how flags are linked to the railway. They created colourful flags using leftover materials and old plastic bags – in an attempt to reduce wastage.

With the input of some of the teachers signed up to the project, we’re creating teaching material accompanied with a Resource Box that will be available through Tower Hamlets Schools Library Service. We’ll be sharing our teacher’s resource later in the year, so keep an eye out by following us on our social media at the links on the bottom of this email!

Thank you to support from National Lottery Heritage Fund. 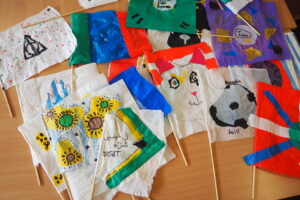 Let’s address the obvious first. What does a year ‘in’ mean, and why haven’t I called it a year ‘out’? Well, ‘out’ suggests I’m going against the norm, against the…

Online spaces for joy, connection and positive interaction for children. Spring Term 2021 – Starting with a CPD session on Zoom on January 21   Join us for this unique…

Positive Images of Black Girls and Women in Picture Books

Our very own Janet Noble from the Tower Hamlets School Library Service shares her top picture books showcasing powerful and celebratory stories about Black girls and women. Janet asks you to…

We use cookies to ensure that we give you the best experience on our website. If you continue to use this site we will assume that you are happy with it.