Tafahum, our Erasmus+ funded project, brings young people together with policymakers to bring about a re-commitment to co-creating a safe, collaborative, shared community that is inclusive for long-term residents and new arrivals.

What changes would you like to see in your community?

We are using a unique blend of intensive one to one work, group work and challenging problem solving and reflection activities, to support structured dialogue through the mediums of film, photography, art and drama. 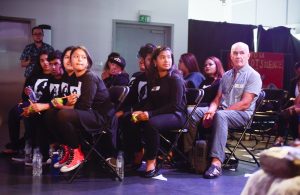 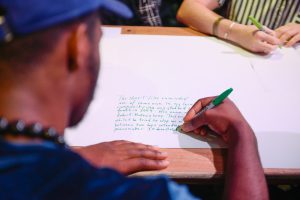 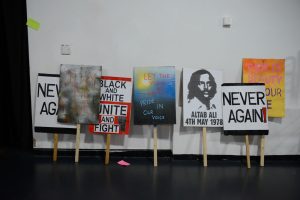 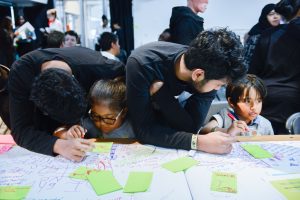 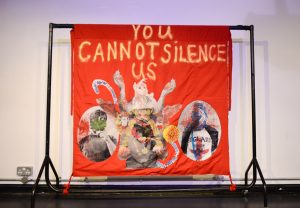 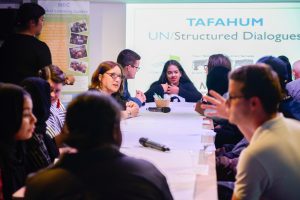 January  |  At the launch, we worked with A-Team Arts, to deliver a dynamic session that provoked deep thought and discussion. The resulting passion we encountered with those articulate young people is something that was addressed at the February workshop.

February  |  The second workshop on Feb 22nd, actively involved both young people and local decision-makers. It was an excellent session, with representatives from the police, IAG and Equalities Team present. Using Forum Theatre techniques and Theatre of the Oppressed, participants worked in mixed groups to create short scenes highlighting discrimination, prejudice and issues resulting from a lack of community
cohesion.   Audience members were asked to comment at particular points during the showcase, and offer suggestions for alternative resolutions to the problems characters faced.

There were certain moments that were powerful, where the reversal of roles was starting to scratch away at some of our ‘us/them’ presumptions. We only scratched the surface, but already we saw spaces opening up where young people can be empowered by being involved in the processes the Council already has in place.

Equalling the passion, however, there was also palpable frustration that there are black holes in services for young people. We had a strong statement from one young person, ‘We have voices, but no one is listening to us’. And what they’re after is not just looking after themselves – these young people are clearly passionate about justice, equality, environment and much more!

April | On the 27th, we were also invited to present Tafahum at Limehouse Youth Centre’s ‘Unite for Youth’ event.

June | On the 26th, and we invited local young people and decision-makers to a Workshop on Co-producing Solutions, to dig deeper using, alternative methods of communication and to open further space for mutual understanding and dialogue.

The event ended with a Long Table, offering all participants an opportunity to reflect on ideas for co-creating a safe, collaborative and shared community. You can find more info regarding the Long Table method, here.

July | On the 19th, UN/structured Dialogues brought Young People and Policy Makers into an immersive performance space, to bring the conversation to the table, addressing local issues in a constructive and enabling way.

October | On the 19th, ‘Tafahum – Opening Hearts, Opening Minds’ will bring up to 30 young people from across Tower Hamlets with decision-makers, to help co-produce solutions to concerns raised about our community and our place within it.

The event will take place at The British Museum’s Clore Centre.

At the end of the workshop, please stay on for the Late – a free event featuring music, slam poetry, theatre, calligraphy and workshops from across the Muslim world, as part of the British Museum’s launch of the new Albukhary Foundation Gallery of Islamic Arts, curated by our very own, Alia Alzougbi.

With young people at the helm, we are working to uncover stories authored by lesser-heard people in our communities, reinterpreting them into arts performances, and touring the work in cultural…

In Spring 2022, a steam locomotive called ‘Poplar’, built in the 1870s, will return to steam and will be brought to Tower Hamlets to celebrate its 150th anniversary in the…

This wonderful project, that promotes critical thinking around gender stereotypes through storytelling.  We believe in the power of storytelling and music in shaping the understanding towards a deeply sensory approach.…

We use cookies to ensure that we give you the best experience on our website. If you continue to use this site we will assume that you are happy with it.